In Praise of the Zeiss Otus Lenses

In Praise of the Zeiss Otus Lenses

Lenses, how many do I need? Most of the lenses I have are the result of trying out lenses to see how they work for me.
I do close-up nature photography and for that I like fine lenses that have what is called “micro-contrast,” even though that term may still not have an exact definition. And by fine lenses, I mean well-corrected lenses -- apochromatic. My collection of lenses accumulates because I insist on seeing for myself what others write about them in reviews.

I do this because I feel I have special needs that other photographers may not value. For example: while many photographers argue against paying for lenses that are very sharp wide-open, because they don’t use that razor-sharp depth-of-field that a fast lens has wide-open. That argument does not work with me because often I want to stack focus by painting in focus where I want it. For this, I like to use ultra-fast lenses that are very sharp wide open, so that I can paint focus and also have the best bokeh. That’s why I like these expensive lenses, not just because I want expensive lenses. However, every once in a while I get a flash of realization that any lens will do and that I could take photos with whatever lens I can lay my hands on.

But most of the time I am of the opinion that really great lenses make really great photos and all of that. My multi-year quest for the holy grail of fine lenses was first satisfied when I discovered the Voigtlander 125mm f/1.5 APO-Lanthar, and for years that was my lens of choice, and still is for some work. And I had some runners up, like the Leica 100mm Macro Elmarit-R f/2.8 and the Coastal Optics 60mm f/4, and a few others.

But all of that got blown out the water with the advent of the recent line of Zeiss Otus lenses. Actually, before the Otus series, I was captivated by the Zeiss 135mm f/2 APO-Sonnar, which as far as I can see is really just an early Otus. It is that good. And I didn’t rush to buy the 135mm, because it was not a close-up lens, so it took me quite a while to grasp that I didn’t care what particular focus-length it was, if the lens was a good as a few reviewers said.

And as a sidebar, I don’t credit many reviewers for all kinds of reasons that I will not labor here. I learned about good lenses from no less than our own Bjørn Rørslett, and his reviews have served me well. I used to also value Thom Hogan, but he has kind of gotten out the lens-review mode. The others I value are Lloyd Chambers and Ming Thein. Aside from his reviews, I consider Ming Thein the finest photographer (overall) that I have seen of our generation.

So eventually I got the Zeiss 135mm APO, knowing that I could return it. Well, that never happened. The lens was better than any of the others that I had, IMO, and at the time I was a devotee of the CV-125. Suddenly the Voigtlander 125mm Apo was sitting on the shelf, something I couldn’t have imagined a short time before. And the reason for that, for all its qualities: it was not good enough any longer.

The Zeiss 135mm APO didn’t take extension well, so for my work I was reduced to cropping out the close-up that I was after. And that worked pretty well. When the Zeiss Otus 55mm APO came along, I was already sold on this idea that Zeiss had of making a great APO lens and letting the price fall where it may. So, I was an early purchaser of that lens and with the 55mm Otus I had a lens that not only took extension well, but with which I could do much of the kind of work I like. The 55mm Otus became my workhorse lens, and I still use it all the time.

And the same thing took place when the Otus 85mm came out and again, recently, when the Otus 28mm became available. I got one of the first copies of each, and there is no disappointment. I see there is a tendency in reviews of the Otus 28mm for quite a few reviews to kind of say that this lens is not a “must have,” perhaps not keeper. I very much disagree with that opinion. The Otus 28 is a monster of a lens in quality and performance, perhaps (like many wide-angles)just a little more difficult to focus.

Along the way I began to sell off many of the lenses I have been accumulating but seldom used, in particular some of the Nikon glass like the two 85mm lenses, the 200mm Macro, the 85mm PC lens, and so on. I didn’t need them anymore and was not using them. Unless I wanted a museum of classic lenses, there was no longer any reason to accumulate them. My wife certainly approves of my selling off those unused lenses.

I sold my Zeiss 50mm Macro, and have the Zeiss 100mm macro up on Ebay now. Although sharp enough, they just are not well-corrected enough for my purposes, but I liked the 50mm quite a bit, but its CA is not acceptable anymore IMO. They also were too “contrasty” for my use. I am surprised that many photographers love these lenses and don’t mind the CA. They must be liking the sharpness.

Aside from the earlier Nikon 300mm f/4 (with the shorter near-focus distance) which I will keep, I don’t collect telephotos. I had a Questar Birder (1400mm), but it was too fiddly for my taste, so I sold that too.

I also have a solid collection of what I call “character” lenses, lenses that distinguish themselves by having a certain character or draw, like the Noct Nikkor, the CRT-Nikkor, the El Nikkor 105mm APO, and many others.

Aside from some exotic lenses (industrials, etc.), my standard set of lenses “for all seasons” now are the three Oti and the pre-Otus 135mm APO.

As for cameras, I am very happy with the Nikon D810. I have tried and returned many of the various mirrorless cameras, including the Sony A7r, A7s, Nikon 1, and others. IMO, for my work, they are not ready for prime time. As for lenses, I work with a tripod, so am not so concerned with weight and portability, but more with sharpness and speed wide open, and if the lens is highly corrected.

Looking to the future, I would like Zeiss to make an Otus version of an ultra-wide angle lens (FF fisheye) and a good macro, something similar to the Voigtlander 125mm APO, but better corrected. And I would like Nikon to make a 50mp or a 100mp camera with an ISO of 64 and an EVF or an even better LiveView. 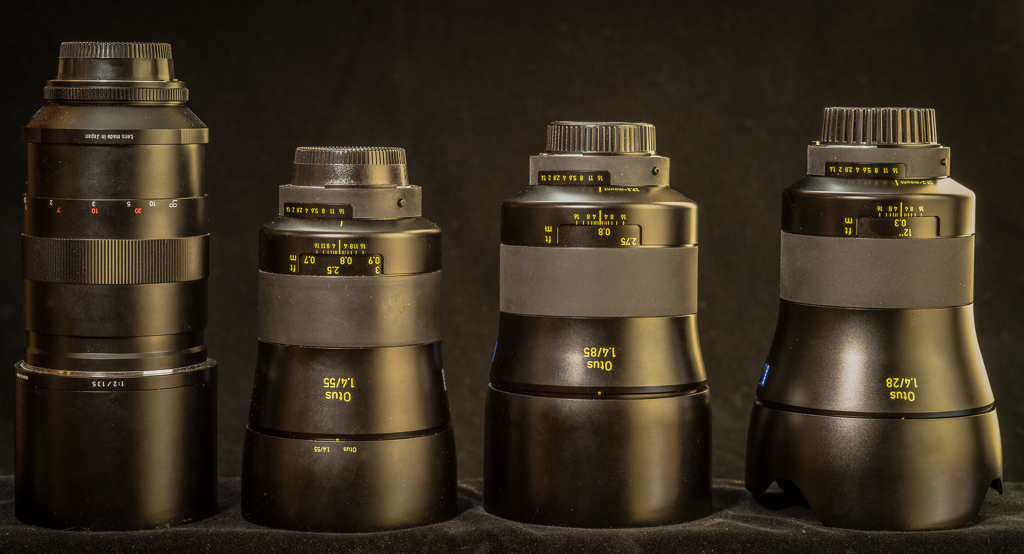