All bookstores are not the same. And just so you know that once upon a time Ann Arbor had one very special bookstore, I offer this post. As I kid, I worked up on campus in some of the college bookstores, stocking shelves or driving a delivery truck, Follett’s and Wahr’s on State Street. And of course, there was Border’s, a general bookstore, which we watched grow from one or two rooms on the second floor into a behemoth and then implode, but in my book (pun intended) there was a single unforgettable bookstore in Ann Arbor that you should know about.

Every college town probably has a local bookstore where everyone who is ‘anyone’ with an education hangs out. In Ann Arbor, in the late 1960s (pre-Borders), that was Centicore Books, originally on Maynard Street, but relocated to South University.
Somewhere I read that the official title was “Paper Back Bookstore and Centicore Modern Poetry Shop.”

It is the South University period of the bookstore I am writing about here. Sure, as mentioned, there were other useful bookstores in Ann Arbor, but this particular one is where both the students and professors bought their books and, more important, hung out. Centicore was the place where you might run into Andy Warhol, Norman Mailer, or John Cage when they were in town. Centicore was “The” place we all went.

And what made it that ‘place’ was a single individual, Russell Gregory. He didn’t own the store, but he made the store what it was and everyone knew it. Gregory had more knowledge about books and literature than any of us, most professors included. And he was not simply a walking inventory of book names. He had read them all and could talk to you about them with real intelligence. Literally everyone in Ann Arbor who read in depth knew Russell and sought him out.

And Gregory not only read books, understood them, and could guide any of us to where the best parts were, he also was a poet and writer (journals and essays). It was not enough for Russell to hold forth at the bookstore, he also had years of weekly get- togethers at his home at which all were welcome and great discussions took place.
While the above is remarkable, that alone was not what endeared Russell Gregory to me.

Russell Gregory is a living Transcendentalist, just like Whitman, Emerson, and Thoreau, the only one I have ever encountered. He not only carried that lineage, but was able to project it into your consciousness and: what a view!

Russell Gregory in the Centicore bookstore, pointing out which books on a topic were important and why, was valuable in itself, but Russell after hours or off in a corner of the shop actually reenacting the mental landscape of the Transcendentalists, empowering you in its vision, is quite another. His ability to make that unique American philosophy actually come to life and live again or live-on was striking. A better word might be “stunning.” Gregory’s sense of local history, his sense of “place,” was profound.

I am not talking about imparting the history of people, or their times and places in a bygone era, but rather a sheer transport into those mental and spiritual realms. In other words, you are there and those thoughts live again in you, here and now! Russell had that power and he shared it with those who could receive it, whenever possible. I would say Russell Gregory lived for those moments. He was there for that.

Personally, he was about as polite and careful in his dress and mannerisms as a human can be and yet he was also able to show you just enough of the edge of what he did not like for you to be guided. He was no stranger to opinions, just very careful to deliver them in such a way as to be useful and not offensive. I wish I had that talent!

In time, Centicore and the 1960s went the way of the world and two brothers named Border took over and launched a completely different kind of bookstore in Ann Arbor. Russell eventually left Ann Arbor and moved back closer to his roots in Ionia, Michigan, where he served as the editor of the local Ionia newspaper for many years and I wish I had time to research what he did with that newspaper. I am sure it was remarkable.
Gregory also worked part-time at Schuller’s Books in Grand Rapids, still guiding readers to the best of the best and I am sure occasionally empowering lucky souls in uniquely American ideas.

Russell, in a word, was a life initiator, flagging you down when you were going nowhere and taking you between the clock-ticking seconds and into a pristine world of ideas beyond time and space as we know it.

I can remember one time I was being a little assy and chided Russell for not writing any poems recently. He turned and looked me dead in the eye and said: “Michael, these days my best poems are walking around Ann Arbor.” Enough said. I got the point.

Russell Gregory was a mentor for me. Anyone else here remember him and care to comment?

[Photo taken of Russell Gregory by me some years ago at “Sailor Pines,” a virgin stand of pine in N.W. Michigan.” 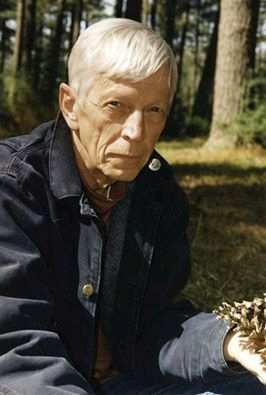