THE SIXTIES RACE RIOTS IN DETROIT/ANN ARBOR AND THE SUMMER OF LOVE – 1967
March 18, 2016
By Michael Erlewine (Michael@Erlewine.net)

Over the years I have often felt like Forrest Gump, always on the sidelines of major movements or events, but not quite front and center. This was not true for the landmark Sixties event “The Summer of Love.” I was right there and it was 1967.

For those of you who are too young, the “Summer of Love” was San Francisco in 1967, when more than 100,000 hippies showed up at the Haight-Ashbury neighborhood of San Francisco wanting to hang out. I was there for that in late summer and early autumn.

The summer of 1967 was also the when the race riots broke out in Detroit, July 23, 1967, what was called the “12th Street Riot.” I remember, because I was living in Ann Arbor at the time and a few of us were foolish enough to drive into Detroit during the riot just to see what was happening. Well, that was a stupid thing to do, because all we found out were nervous cops putting shotguns to our heads and telling us to turn around and get the hell out of there. We got.

And the Detroit race riots had their own little ripple-effect as far out as Ann Arbor and the one-block section of Black businesses on Ann Street, where our blues band played at a Black bar by the name of Clint’s Club. During the Detroit riots the police closed down that one-block area of Ann Arbor and even put orange saw-horses around Clint’s Club to signify something. Nothing race-related was happening in Ann Arbor, as far as I knew, and suddenly we had no gig.

This probably led to our getting out of Dodge. In fact, my group “The Prime Movers Blues Band” drove all the way across the country to San Francisco (and back) in our 1966 Dodge Van. We had our band name all over the van, but most people thought we were a just another moving company, even though across the front of the van we had the slogan “Gonna Ring a Few Bells in Your Ears” by legendary New Orleans performer Jessie Hill from his song “Ooh Poo Pah Doo.” Any of you remember that song? Here is that tune for those of you with open ears:

How we crammed all of our band equipment and the entire band (there were five of us) into that Dodge van and managed to get it across the U.S. is beyond me. God knows there was not room for all that and also five suitcases, so who knows what we were wearing out there. We took turns driving and made it a non-stop trip. I can remember waking up as we crossed the Continental Divide to find us moving at a snail’s pace

surrounded on all sides by a flock of sheep. That moment was a long way from what we were going to find in San Francisco.

And of course we had no money and no place to stay once we got there. We just went there cold, because we knew it was happening. I am eternally grateful to my friend Michael Bloomfield (lead guitar in the Paul Butterfield Blues Band and guitarist on Dylan’s “Highway 61 Revisited”) for finding us a place to live for the summer, which turned out to be the Sausalito Heliport. This was a place where some music groups practiced, and where we crashed on the floor. I remember some famous woman singer gave us $5 at the heliport for food. It might have been Gale Garnet (“We’ll Sing in the Sunshine”). We had zero money. Remember those days?

In fact we played blues at a local Black rib-joint for free just to have something to eat. We ate a lot of ribs because of our situation. The Sausalito Heliport was just across the San Francisco Bay Bridge to the north. Some people there live on houseboats, which was way cool. The band and I spent most of our time in San Francisco, where we auditioned and/or played at all the major Sixties clubs, places like the Avalon Ballroom, The Straight Theater, The Matrix, The Haight A, and even the Fillmore Auditorium. In Berkeley we played at the New Orleans House.

It was thanks to Michael Bloomfield that we played the Fillmore. Bloomfield was not only one of the most incredible guitarists I have ever heard, he was also one of the nicest and most compassionate musicians I have ever met. We knew the Butterfield Blues Band pretty well, and Bloomfield was our friend, for some reason. In fact we had recorded the Butterfield Band in Chicago when they were first doing their (now legendary) tune East-West, which is probably the first extended-solo track ever recorded and the harbinger for much psychedelic rock. It is over 13 minutes, then unheard of on vinyl, except in jazz. Heavy metal music kind of grew of out that. Our recording of East-West was released on an album some years ago by Butterfield keyboard player Mark Naftalin.

Bloomfield not only found us a place to stay but asked us to fill in for his band, the Electric Flag when they could not make a gig, and it was at the Fillmore at that. This was August 29th of 1967 at the Fillmore Auditorium, when we opened for Cream on what I believe was their first concert in the U.S. or at least in San Francisco. For those of you who don’t know about Cream, it was the British rock supergroup featuring Eric Clapton on guitar, Jack Bruce on bass, and Ginger Baker on drums. Their songs included many classic blues tunes and, of course, their smash hit “Sunshine of Your Love.”

In fact, I watched Cream (with needles in their arms) shoot up speed in the green room before the show. And I had a shouting match with Fillmore promoter Bill Graham before the show about how to mic our amplifiers. Graham wanted to run our sound directly through these giant walls of speakers, but I wanted them to mic our amps through their speakers, so our particular amp sound would be preserved. I am sure I was wrong, but

at the time it seemed so right. And shouting with Bill Graham was almost required back in those days.

We played at a number of venues in San Francisco and in Berkeley. My best friend Michael Katz lived in San Francisco and played in the band “Anonymous Artists of America” (AAA). They dropped acid every time they performed. The house in which their band lived was covered (walls and ceilings) with San Francisco concert posters. Those posters are worth a small fortune these days.

I remember a gig the AAA did at Stinson Beach, north of San Francisco, near Mt. Tamalpais. I believe Charlie Musslewhite was on the same bill. Yes, they all dropped acid and then played. I must say that it was different.

The poster shown here was for one of our gigs, in this case the “Haight A,” in San Francisco. I can’t remember all that much from the time, but the whole summer experience was over the top. I can remember one time wandering through the Palace of Fine Arts in the Marina District of San Francisco, a huge palace constructed in 1915 for the Panama-Pacific Expo. I believe it was made out of Paper Mache. In the early morning with the mist rising, it was like some kind of dream. Looking back, the whole Summer of Love appears like that to me now.

Anyway, there you have a few of stories from the Summer of Love and the race-riot effects in Ann Arbor in 1967. I am giving you the cream off the top and not the blood, sweat, and tears that also went along with it. I am sure you get the idea. It is hard to even remember how it was back then, much less to describe it to someone else. It was the “Summer of Love,” and our band was there. Hopefully you can sense a bit of the flavor from that time. 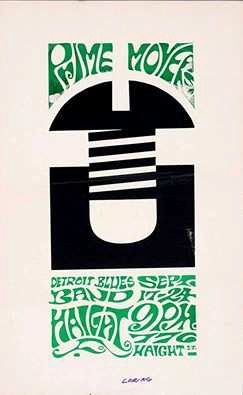