The Video Scene – My Take

While I have been away from this forum, I have been mostly learning video, so perhaps a quick overview of my experience will interest those of you who are not up-to-speed on video. At least it might help explain my interest in it. I am not expert, so be warned.

I have been interested in video from the time I watched my dad's 16mm home video and that was a long time ago. Then, as digital camcorders became available I tried this or that one, but never really mastered the learning curve. Video is very different from still photography in many ways. Then, more recently, some years ago now, I worked with Panasonic's HVX200 (an HD camera), but still didn't manage to really get control of all that is involved. I also had a couple of Sony VX2000 camcorders along the way and so on. Then came Nikon DSLRs with internal video.

In the beginning I certainly thought video on DSLRs was a fad, at least at first. My view that video would never last did not turn out to be true, but only because it succeeded in transforming itself in quality and became more and more useful.

The real problem with DSLR video is 8-bit color, especially with large megapixel sensors, which translates to 255 possible values per channel, plus pixel-binning and line-skipping, which causes all the video artifacts we hate to see. As a delivery system for video, 8-bits is good enough for much of the DVD video we watch on TV because the image is baked-in, but it does not really allow us work with that video much in post. In other words, if your video is perfect right out of the camera (or down-sampled successfully in post), 8-bits will work as a final delivery format (to watch), but try to grade it or work with it as we do with raw files, and it won't hold up. It breaks down easily. All of the DSLRs I have used have this 8-bit color problem.

Even so, for some time the "DSLR Look" kind of ruled the amateur and indie video scene. For one, the ante-in was relatively inexpensive, and you could get real 1080p output at 24 or more frames. A whole scene spiung up based on DSLR-based video. Clients demanded it.

Then DSLR cameras began to offer HDMI video out in a stream larger than 8-bits if you had an external recorder. In fact, you could get 10-bit Apple ProRes out of cameras, recording to something like the Pix 220i or 240i from Sound Devices. I have worked with the Pix 220i and this 10-bit video looks much better, often with a flatter profile, one that could be graded in post successfully. And my Pix 220i allowed me to plug in two XLR audio lines directly, allowing me to bypass the camera's internal inferior pre-amps. I got good sound.

10-bit color offers 1023 values per channel, four times the accuracy of 8-bit, and is pretty much mandatory for chroma-keying. All owners of sophisticated DSLRs are used to grading raw, so the idea of grading video in a similar manner seems natural.

And so, until recently, we are in a period (perhaps winding down) where those DSLR HDMI ports allowed various external monitors to be plugged in, as well as outboard recorders that give us 10-bit ProRes or the equivalent.

The period when DSLR 8-bit video color was considered acceptable is winding down. The DSLR 8-bit output, instead of being the new whiz-kid on the block, is now instantly recognizable as 8-bit and no longer in demand that much. We have already moved on.

Meanwhile the specter of 4K 10-bit (or higher video) has appeared, first in dedicated pro and pro-sumer video cameras and now in DSLRs like the Panasonic Lumix GH4, which offers internal 4K-8-bit color that is pretty darn nice I have to admit. And this fall the GH4 will output 10-bit ProRes to an Atomos external recorder.

While there are 4K TVs appearing, few are counting on 4K to sweep the industry as far as viewing movies and what not. That is not the idea. What is happening is that more of us are shooting in 4K and then dropping it into a 1080p timeline where it looks really, really good. In addition, using the 1080p timeline, we can punch into the 4K and do simple pan & zooms. The net effect is that one camera can now do where before we had to have two cameras on the subject.

This is especially useful in interview situations, where we can record in 4K and then pan & zoom in the 4K on a HD timeline, allowing us to have both a distance shot and (at will) zoom in close and still be at 1:1 resolution. In effect, we can do our own dolly shots without a dolly. This is really a great feature of 4K.

I have been using the Sony FS700 FF camera for some time, mostly shooting in 4K>HD, meaning I am shooting in 4K, but outputting it as 1080p for post. This is done by an external recorder, the Odyssey 7Q from Convergent Design. The result is outstanding and very gradable. I can shoot in Rec709 (800%) or in s-log2, a flat profile that preserves the maximum dynamic range for superior color grading in post. "s-log2" is like working in raw. Convergent Design will (hopefully) soon release a firmware upgrade that will give a compressed 4K, which should be even better.

Right now the new darling is the Panasonic Lumix GH4 mirror-less camera ($1,699.99), which I must say is a pleasure to use. I just did a three-camera shoot of a concert and I recorded 8-bit 4k internally in the GH4 and got to work with an EVF that I could punch in and nail focus.

In addition, the advent of the new Sony A7s DSLR camera (coming this July) brings with it a new caveat, a 4K sensor with very large photosites that appears to produce really lovely lowest-light 8-bit video, including 4K 8-bit out to an external recorder. This is the first time I have seen 8-bit video output spoken well of, so I can't wait to see what this means for myself.

In the A7s, the FF Exmor CMOS sensor is only 12MP, with exactly 4K filling it up such that the photosites are much larger (hugh) than with most DSLRs and invite much more light. The ISO on this camera goes up to a ridiculous 409,600 and can take useable photos in the dark. Sony is being innovative here, bucking the trend and going back to the future with a 12MP sensor that allows huge photosites. We used to talk about how the photosites on the D3 were larger than subsequent Nikons, if I remember right.

Just as important, Sony is reading the entire 4K out of the sensor at once, with no line-skipping or pixel binning, so there will be no moiré or other artifacts. Of course this is what kills all the large-sensor DSLR video, line-skipping and the like. Since the A7s lacks a global shutter, there will still be the much-hated rolling-shutter effect with video.

In addition, cameras like the BlackMagic Pocket Camera ($995) offers 10-bit 4:2:2 ProRes that is very nice, and gradable. I find that the Blackmagic Pocket Camera works best in the studio, in controlled conditions, and with good lighting. It does not have many bells and whistles, but it puts out a great image if you have enough light and perhaps don't depend upon it for sound. I am really impressed by that image.

So there you have a rough overview of my take on the video scene. Keep in mind that I am not an expert in this field and it has been a long and tough learning curve for me. I'm basically a still-camera guy. Moreover, it has been obscenely expensive, not just for the cameras themselves, but for the seeming endless paraphernalia that one has to buy to take advantage of the quality of this new video.

If I have misunderstood something, I apologize. You can get great detail on a site like DVXUser.com, but hopefully this account will be useful to some.

IMO video is here to stay and rather than have camcorders warp to the DSLRs, it is perhaps more likely that the DSLRs will eventually shape-shift toward being camcorders.

P.S. This is a lot of information and it may be too condensed. If you have questions, I will try to expand on whatever is unclear.

[Photo of the Sony FS700 with the Convergent Design Odyssey 7Q monitor/recorder in the studio.] 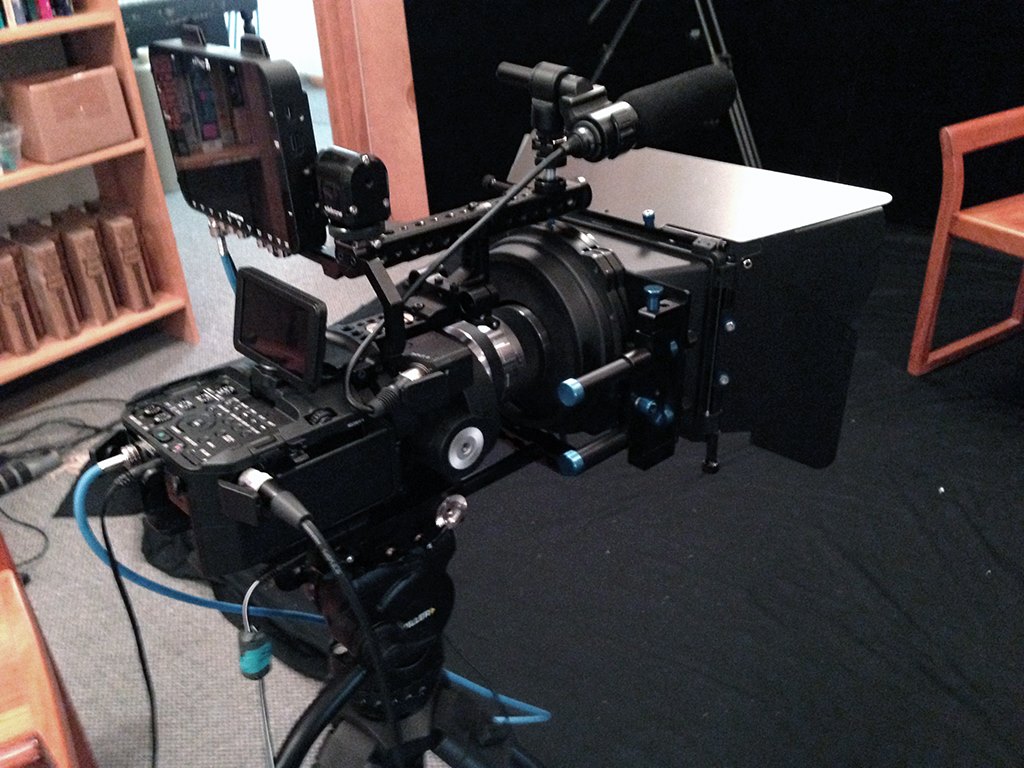