TALKIN’ TO MYSELF
August 19, 2016
By Michael Erlewine (Michael@Erlewine.net)

I usually write my blogs with you, the reader, in mind. But I also end up talking to myself quite often, and this blog is one of those, a conversation I am having internally that I will share here because it is happening and other topics that I might write about are not on my mind, just now.

I spent years studying Black music, in particular the Chicago blues. That’s pretty much all I did for many years, including playing it everywhere my band could. What was the attraction?

Well, I love music, but to me the blues are much more than just another form of music. “The Blues” is IMO music informed by the wisdom of life experience; it holds the residue of the experience of life that I guess could be called the “truth” or the “way it is.”

As a middle-class white boy, something was missing from my own experience growing up and I knew it. I could feel it. It was like not having some essential vitamins that my body craved. Eventually, I found it in Black music, particularly in the blues, and especially (to my taste) in Chicago blues and the artists who played it. My brother Dan and I would drive to Chicago to dig through the record bins in tiny stores for old blues 45s. Better yet, we would hear the great blues players live in Chicago in places like Teresa’s Lounge, where one night I watched Little Walter and Junior Wells almost get into a fight about who was going to play. Things like that.

IMO, the Chicago blues artists dispensed with all the superficial politeness that plagues society and just got right down to it, the nitty-gritty of life -- the bottom line. I followed them down there, searching for a reality that I felt was missing in my own life, some closure to the question of what life was all about. I found it in that music, but I also found it in the Black blues players themselves. I made a point of meeting them and have personally interviewed scores and scores of them, one-on-one.

For me, the Chicago blues music is the best, but behind the music was the mind and experience of those who made that music. There are all kinds of music, but not all music is already boiled down to what life is all about. For me, the blues is nothing but that, and that is what I sensed in the music and found in the lives and attitudes of the players themselves.

I like the “best” in all music, which is why I founded the All-Music Guide, a guide to the best music of each artist. The All-Music Guide remains today the largest collection of music data, reviews, discographies, etc. on the planet. And, as I keep saying, out of all that music, for me, the quintessence, the tip-of-the-top, is the message that blues music

The life of America in the 1950s, when I grew up, never managed to get to the point of it all. As mentioned, something was missing. I felt I was being shined on, just shuffled along, in one door and out the other. And for some lucky reason, I was aware (or I felt) that there was “more” to life than what I knew, whatever that might be. I didn’t know what I was missing, but I could hear it in the blues when I listened carefully. And by “more,” I mean something more real, more satisfying and truthful, both good and bad.

And so I listened and listened, eventually stepping through the blues music itself into the lives of those who played it. They had the power to play the blues and, for me, eventually I could not distinguish the music these blues artists played from the life savvy that made it possible for them to play it so convincingly. Yes, I knew their music; I sang their music several nights a week for years, but through meeting these blues artists in person, through interviewing them, hanging out with them, I understood so much more. For example, the great harmonica player James Cotton (and his entire band) lived with us for weeks on end -- that kind of thing. I have always been at my happiest when sitting at the feet of those I feel are masters. These blues artists were master musicians and masters at life, at least in the eyes of this middle-class boy from White America.

Like separating the wheat from the chaff, I did my best to cull out the wisdom of the blues players from the lifestyle that too many of them were forced by circumstances to live. I am talking about the alcohol, drugs, and poverty that swirled around the bars and clubs where blues music was played. I wanted the wisdom, but not the lifestyle that all too often was killing the blues artists I loved and respected. For me, this learning period went on from the late 1950s (first with folk music), through the 1960s, and on into the early 1970s.

Over time, eventually, I began to respond, at first distantly, to another drum beat. There was no way I was about to give up my thirst for and appreciation of the directness and the sheer satisfaction that the truth and reality of blues music brought into my life, but, as mentioned, the “down-ness” of that scene also ate away at me.

I had known, first hand, the lack of wisdom (IMO) that appeared in my life through my schooling and (sorry to say this) the sheer vacuous mentality of 1950s White America. And I had found in Black music (and the men and woman who played the blues) the kind of wisdom of life I thirsted for. I was by that time addicted to that kind of direct truth and contact with life and had little respect for anyone who did not display it in their eyes.

I found the solution to this problem in the Tibetan lamas and rinpoches who were just then arriving in the United States. They had all the directness and common sense that I found in blues music (and those who played it), but they also had a highly organized psychology and methodology for living life that I had not seen before. The Tibetan lamas had lived life, found a real truth, and I could feel it living in them just as it lived in

the great blues players. It was, for me, a simple thing to switch from studying Black music to studying and practicing Tibetan Buddhism.

And the key factor to it all was that I could respect the wisdom of the Tibetans as I had the wisdom of the Black community of blues players. I have never been able to learn from others by just being taught, unless those teachers had in their eyes the wisdom of life that I hungered for. They knew what I wanted to know. This is why I languished through my school years and finally never even graduated from high school. For me, school was empty of wisdom. At the same time, I am an excellent student with teachers that I respect the life-savvy of.

And where was all this born? My guess is that I got that way from the fact that as a young child I lived way out in the country in rural Pennsylvania, where Mother Nature was all there was. Being trained in nature’s law (which is not man’s law) spoiled me for anything less than the reality that nature insists upon. Looking for something like the integrity and honesty of nature in my life teachers, I did not usually find it until I met the Black blues players, and later, of course, the Tibetan lamas. Neither of them blinked. I could trust their wisdom. And here I am, still profoundly affected by the blues, and busy practicing the dharma.

[Photo of me in the late 1960s interviewing one of my heroes, the great Muddy Waters.] 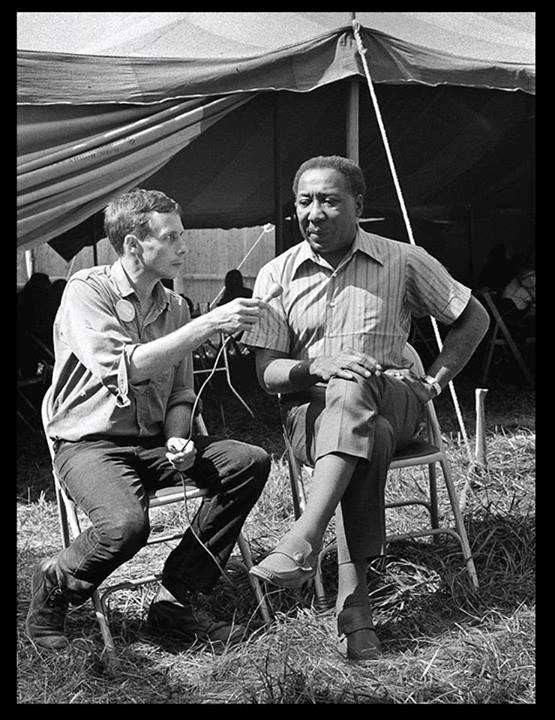 Return to “Articles on Music and the Prime Movers Blues Band”