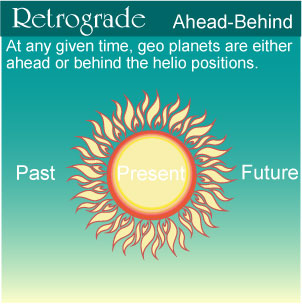 Thus both geocentric and heliocentric positions have a time within the cycle during which they lead or are sampling new degrees of the zodiac, that is: going over fresh zodiac area. In fact, the helio position is the midpoint or focus about which the geo position loops, which is what we have been pointing out all along.

The stations or points in the zodiac where the planet goes retrograde or direct are the two points where this maximum phase angle takes place. This may amount to an alternate form of the square aspect where, instead of 90-degrees being the limit, the limit becomes the maximum phase angle, in effect, the stations. In other words, this technique measures the point of maximum phase angle between the Earth and any other planet -- perhaps another approach to the concept of the "square" aspect. Only here we have a measure of the amount of change required for the two planets to become one -- an index of change.

The technique is one of a number of techniques that are very useful for charts where there is no exact birth time. For each planet we can determine the percentage of difference between the geo and helio position. In addition, we can calculate a total for the entire chart using all the planets but leaving aside the Sun and Moon. And then for each planet we can determine where in the retrograde cycle it is. Is the geo position ahead of the helio? Is it ahead and direct in motion or ahead and retrograde in motion? Or, is the geo position behind the helio position? Again, is it behind and direct or behind and retrograde in motion?
Top
Post Reply
1 post • Page 1 of 1

Return to “The Retrograde Phenomenon”