I am off to Karma Triyana Monastery in the mountains above Woodstock, New York for some ten days, the 23rd year in a row that Margaret and I have traveled to this monastery to be with our dharma teacher Khenpo Karthar Rinpoche for a ten-day intensive. He is now 88 years old. The topic for most of these years has been teachings on Mahamudra meditation practice.

I will mostly be offline for a while, which will give you folks some rest from my rambling blogs. I will try to check in from time to time as I am able to get access to the Internet. It has been a busy summer. Meanwhile here is a story about Khenpo Rinpoche that I find really wonderful.

Many years ago in the 1980s I had a dream. In that dream I presented my dharma teacher Khenpo Karthar Rinpoche a drawn image or portrait of himself. It was one of those dreams that is magical, somehow more real than waking life. For that reason I felt it was important that this dream be made real and acted out in real life. After the dream I began actively to consider how this could happen. I tried on many ideas.

I finally settled on a sketched portrait, but finding an artist good enough was not easy. I knew of one such artist, one of the finest draftsman in Michigan, a man named John Felsing who was renowned for his life-like portraits of wildlife, especially birds. I contacted Felsing and asked to visit him. Then Margaret and I traveled to Lansing where he lived and sat down with him. I explained my dream and what I was hoping he might do. After some discussion, he agreed to do a drawing and I gave him a really nice photo of Khenpo Rinpoche.

Several months went by and I heard nothing. Then one day a large envelope came in the mail. It contained a first sketch of Khenpo Rinpoche. To my dismay the drawing he sent was a sketch of an elderly oriental gentleman, but not the dynamic rinpoche I knew. This would not do. I got on the phone and explained this to John Felsing and he said that he would try again. To assist him I then sent him some of Rinpoche’s dharma teachings and one of his books, “Dharma Paths.”

Again, several months went by and then one day another large manila envelope showed up in the mail. I hesitated to look inside; with baited breath I carefully opened the package. When I did, this time the image was actually of the Khenpo Rinpoche Margaret and I know. Apparently the books and Rinpoche’s own teachings helped to communicate the idea of the man himself. The ending to this story is remarkable.

When the artist Felsing finished the final drawing he called to notify me of that. And as it happened Khenpo Rinpoche, who (of all things) was visiting our dharma center that very day, was about to do an empowerment for our local group that very evening.

Felsing did not hesitate a moment, but said he was coming to Big Rapids to see Rinpoche. He jumped into his car, drove through the oncoming night to our center and, when he arrived, formally asked Rinpoche to give him “refuge.” Refuge is a short ceremony that takes place when someone discovers that they have great respect for the dharma, respect not only for the

historical Buddha, but also for his teachings (the dharma), and the sangha (those monks and nuns who embody the living teaching). It is a request you make of a teacher. Felsing’s request was honored and Rinpoche gave the refuge ceremony, which includes giving those who ask for it a dharma name.

Apparently during the months that John Felsing was working with Rinpoche’s image and reading some of the teachings, he was moved by what he learned and had developed a true
respect for the dharma. He was inspired to become more actively involved in the dharma and so asked to receive the refuge ceremony. I am struck by how a simple contact with Rinpoche, even at a distance, made a difference.

One of the projects I will be working on when I am at the monastery will be to make available a special limited print edition of Felsing’s drawing of Khenpo Rinpoche as part of a fund-raising effort. This limited edition of fine-art prints has been printed on special paper on an offset press. Each is signed by Khenpo Karthar Rinpoche himself. The finished piece, including a mat and frame, an acrylic sheet, plus hardware to hang it on the wall is 24x30 inches. I include a photo. 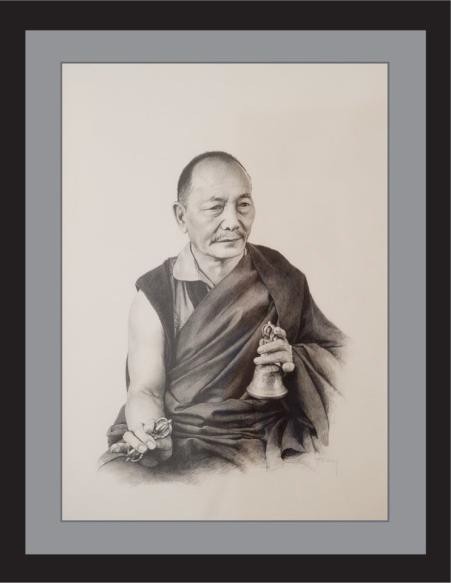 Return to “Stories and Pilgrimage”