UNDERSTANDING THE SOLAR OR SUN PERSPECTIVE

UNDERSTANDING THE SOLAR OR SUN PERSPECTIVE

Some of you have asked me why most astrologers do not use these solar eruptions in their day- to-day astrology. There are at least a couple of reasons why. First, astrologers are dependent on scientists and astronomers to tell them when these solar events are taking place. Astrologers and astronomers have not been on close speaking terms for some 400 years now, which brings me to another and perhaps the main reason why astrologers don’t monitor events and even planetary movements on the solar system level. Please bear with me while I try to lay it out here.

This story actually starts some 400 years ago when Copernicus pointed out to the world that in fact the Sun does not orbit the Earth as everyone had always thought, but just the other way around: the Earth orbits the Sun. That was news to the civilized world!

However, the astrologers continued to use only the geocentric (earth-centered) perspective, the traditional astrology chart we all know and use. I don’t know why some astrologers did not accept or adopt also the new heliocentric or solar-system chart. However astrologers back then did retain the cultural tradition of applying astronomical information to our personal lives, and they do to this present day. But a rift opened between those astrologers who did not consider Copernicus’s discovery important enough to also chart it and the astrologers who did also chart it and eventually were called just astronomers rather than astronomer/astrologers as they had all been called up to then. In the modern world, astrologers and astronomers are not usually on friendly terms, mostly due to the astronomer’s attitude toward astrology and the astrologer’s lack knowledge or interest in the helio perspective. The astronomers also gradually forgot the cultural side of their science. That is how it stands today.

Using the two perspectives (geo and helio), two charts, astronomers can land a spaceship on the Earth or send one orbiting the Sun. Astrologers on the other hand have chosen (for reasons I have never found documented) to limit themselves only to the earth-centered point of view, and the standard natal chart wheel used by modern astrologers is basically a snapshot of the solar system from the earth’s position embedded deep within that system. Astronomers on the other hand use both the geocentric and heliocentric charts, giving them the ability to also look at how the whole solar system functions as it actually is, with the Sun at the center, and the other planets orbiting the Sun. As mentioned, why astrologers never adopted this radical new chart I have no idea, but I wish someone would research it and tell me.

However, I have been using both the traditional astrological (geocentric) natal chart AND the solar-system heliocentric chart used by astronomers for the last forty years, and I find the two charts together give us a much clearer perspective than either chart alone. I have called this

technique StarTypes and have been trying to tell astrologers about the value of using these two charts to achieve a kind of triangulation or stereo view of a moment. However most astrologers have shown no interest in this, preferring to label me as “that heliocentric astrologer,” when I have always used both charts together all of these years. But that is a sidebar issue. Let me tell you something about this StarTypes approach:

The StarTypes technique is modern in that it combines the traditional view used by astrologers with the heliocentric view used by astronomers to achieve what amounts to a stereo view of the birth moment, while also preserving the cultural side of both charts. Until StarTypes this just had not been done and the enhanced perspective or stereo view of combing both geocentric and heliocentric perspectives offers a much more accurate and complete picture of what the planets are doing at the moment of an event such as a birth.

Where the astrologer’s geocentric (Earth-centered) and the astronomer’s heliocentric chart intersect effectively triangulates a nativity, clearly pointing out the circumstances we find ourselves in (geocentric chart) and what actually is going on behind and within those appearances (heliocentric chart). StarTypes takes into account the actual inner workings of the solar system that, along with our traditional astrology chart, provides us with what amounts to a 3D or enhanced view of the birth moment and ourselves.

In essence the StarTypes technique maps the large-scale planetary patterns taking place in the heavens from two points of view and compares them as the context in which our personal lives are taking place.

To better understand this I have included a diagram that shows the heliocentric (astronomer’s) chart on the upper left and the geocentric (astrologers) chart on the upper right. I use my birth date. I hope you can easily see that the traditional geocentric astrologer’s chart is like a snapshot taken from the Earth’s view as a planet embedded in the solar system, actually embedded quite close to the Sun. So the traditional astrology chart is Earth’s perspective of the various planets from its orbit deep within the solar system. On the other hand, the heliocentric chart (upper left) is an overview perspective of the whole solar system. This is a view of where the planets actually are in relation to their functioning center the Sun and not the view of how Earth sees the solar system. You can see that there is a difference between the two views and this difference provides two views of the same planets, the same system, and the same moment but just from alternate perspectives.

My point is the these two views complement each other and provide us with a more complete picture of what is going on than either of the two charts can by itself. The third chart, the one at the bottom of the diagram shows the heliocentric perspective but with one planet (Mars) drawn so that you can see the two perspectives. I just used one because drawing all would be a bit overwhelming to sort out visually. In this third chart you can clearly see that Earth (astrology chart) sees the planet Mars in the zodiac sign Aries, while Mars’ actual position in relation to its own center is in the zodiac sign Aquarius. This is quite a difference, and the difference is due to the earth being embedded within the actual solar system and from that position Earth sees Mars in Aries. But in fact, in relation to its real center (Mars does not orbit Earth either), it is in the zodiac sign Aquarius.

Scientists and astronomers use both the geocentric and heliocentric charts to get their work done, but for reasons I don’t know astrologers chose some 400 years ago to only use one and ignore the newly discovered heliocentric perspective. It is perhaps time that astrologers as a group begin to use both charts in their work. I have done this for forty years and get very good

results. Neither chart has the whole story, but together they offer us an enhanced view. Consider the heliocentric chart as a 2nd opinion on your birth moment, another way to see yourself.

In the next few days, if my team can manage it, I will install on the web a little program that will allow each of you (its free) to see and learn about your heliocentric chart patterns. This will give you another perspective on your chart and life that you may find helpful.

In approaching this, the traditional geocentric astrological chart is a chart of your personality and the actual physical earth-centered circumstances in which you find yourself, while the heliocentric natal chart is a map of your more inner self. I like to call the heliocentric chart your ‘dharma chart,” because it is a chart of what is behind or supporting your persona. Remember the traditional astrology chart is a snapshot of what? It is a snapshot of the entire solar system as seen only from Earth’s perspective. The heliocentric (astronomer’s) chart is the actual chart of the solar system itself, of what the earth’s view is but a snapshot of. We need both views to be complete.

I apologize if this is a little technical and I am hoping that even you non-astrologers reading this will see why two views that triangulate as these two do are better than one. Neither view is better than the other, but the combination is better than having only one perspective.

Let me know if this makes sense to you and I will write a little more about this StarTypes technique and introduce you to your own heliocentric chart and the patterns it contains.

Thanks for listening, Michael 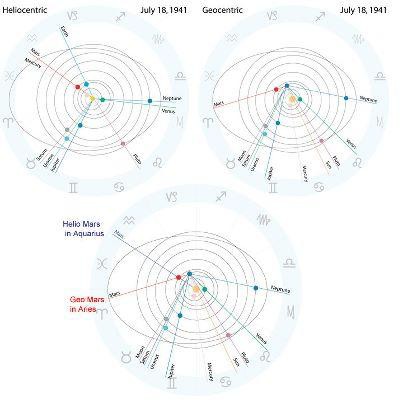 Return to “The Sun is Shining - Heliocentrics”