Derek Hess has produced some of the most remarkable concert posters of this era. Certainly, he has no real imitators and is widely collected, especially in Germany and across Europe. While today, Hess is producing more fine-art prints and fewer posters, he says that his first love is music and he has left us a legacy of some 200 or so concert-music posters. Hess is one of the few real draughtsmen in the business, being able to draw almost anything at will. Originally a stone lithographer, Hess adapted his skills to the silkscreen, early on. 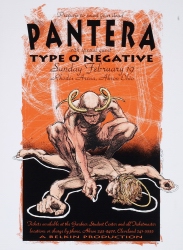 Derek Hess studied drawing and printmaking at the Cleveland Institute of Art, where his father taught industrial design, and found his commercial beginnings doing handbills and flyers for underground concerts in the Cleveland area. Hess also took courses at the Center for Creative Studies in Detroit. He traces his influences to the work of Gil Kane and the adventures of Captain America. It is obvious to me that the work of Heinrich Kley had to be in the mix somewhere.

While booking shows for the Cleveland venue Euclid Tavern, Hess used his growing skills as an artist to design posters and flyers for the rock shows there. And his work caught attention, at first modest, and then much more… today worldwide. Not only could Hess put pen to paper like very few poster artists, but also he brought to the medium a message. Hess has called his work "Meditation on paper," and others have seen it as strong social commentary. Many of his pieces are considered controversial. But everyone agrees he has a unique talent and vision.

His posters are in museums all over the world, including the Rock and Roll Hall of Fame, and the Louvre, in Paris. Today, Derek Hess is busy producing shows of his materials all over the world, not too mention any number of CD covers and fine art prints.
Top
Post Reply
1 post • Page 1 of 1