I received my copy of the Zeiss Otus 55mm APO lens today. Having fallen in love with its younger brother the Zeiss 135mm APO lens soon after it first came out, I was more than ready for the 55mm Otus.

I have not had time to put it through its paces, but I already see enough to agree with everything I have read about it from other reviewers as to what a great lens this is. I am primarily a close-up and macro photographer of nature subjects, most often plants. We are in the midst of serious winter here, so all the plants I have on hand are some cyclamen flowers that have seen better days.

I have spent years stacking focus, and have taken many hundreds of thousands of shots in that department. I happen to have a lot of lenses available, most of them macro or close-ups, plus other lens types that are somehow useful for close work.

Over time I found that the only lenses that really worked best for my work were lenses that were sharp and highly corrected like the Voigtlander 125mm APO, the Leica 100mm APO Elmarit-R, the Coastal Optics 60mm APO, several exotic Nikkors like the Printing Nikkors, and others.

My particular interest has been in very fast lenses that are sharp wide open or nearly so. It does not matter that the depth-of-field for this kind of lens is very shallow, since I want to stack focus with them. By stacking focus as deep as I want, I can bring out any part of the subject into sharp focus and approximate a depth-of-field effect, and know that (thanks to the fast speed) whatever I do not stack into focus will be a lovely bokeh.

Since focus stacking is a digital sampling technique, not unlike sampling audio for CDs or sampling video for DVDs, then because sampling is not perfect (which by definition it is not), there can be artifacts. Managing artifacts generated by stacking focus is complex and, thanks to retouching, is perhaps as much an art as a science.

Focus stacking, aside from a few who make it a virtue to stack photos handheld, is done on a tripod. There are several brands of decent software to process stacks of images into one final image that is as in focus as much as we wish it to be. I have tried most (if not all) of the software out there and find that Zerene Stacker is, for my work, the best all-around software, especially when it comes to retouching.

However it makes a difference (to the software) how we stack the photos in the first place. There are three popular ways to photograph stacked layers, and some are more artifact prone than others. The key is to


move the entrance pupil of the lens as little as possible. Starting with the least adequate method:

(1) Mount the camera and lens on a focus rail (which is on a tripod) and gradually move the unit along the rail toward the subject being photographed.

(2) Mount the camera and lens on a tripod and turn the lens barrel (helicoid) in as fine a way as possible. Lenses with a long focus throw make it much easier to so this.

(3) And finally, the superior method (that will cause the least artifacts) is to fix the lens on a bellows (on a tripod) so that the front standard is fixed and mount the camera on the rear standard of the bellows. Then move only the rear standard to focus. This method holds the entrance pupil in the lens stationary and moves only the camera.

Not all lenses will work well with the third method and the first method (focus rail) can be too crude at times. This leaves the second method, turning the helicoid (lens barrel) as a good option unless the focus throw on the lens is too short to allow you fine movements. That is the method used in the images here.

For example, the Coastal Optics 60mm F/4 APO lens is an excellent lens, but it has a focus throw of only 210-degrees, too short IMO, plus f/4 is not very fast. While I found this lens good for copy work, it ultimately proved too much trouble for macro work,


and I even tried putting it on a focus rail, etc. And then things changed.

Game changer number one was the arrival of the Nikon D800E camera body. I had been using the Nikon D3x for some time and liked the rich blacks I got out of it. However, the D800E was IMO an order of magnitude better and my focus stacking software really liked this camera, which brings me to today.

Game changer number two came with the release of the Zeiss 135mm APO lens. As mentioned earlier I had gravitated to highly corrected lens like the Voigtlander 125mm APO, the Leica 100mm APO Elmarit-R, the Coastal Optics 60mm APO, and several exotic Nikkors like the Printing Nikkors and others. I was also doing my best, short of lecturing, to tell my fellow focus stackers that the key to lenses for this work appears to me to be how highly corrected they are. I mostly was ignored and sometimes laughed at, but I persisted only because the results I was getting from APO lenses were so much better than from others, at least for stacking. 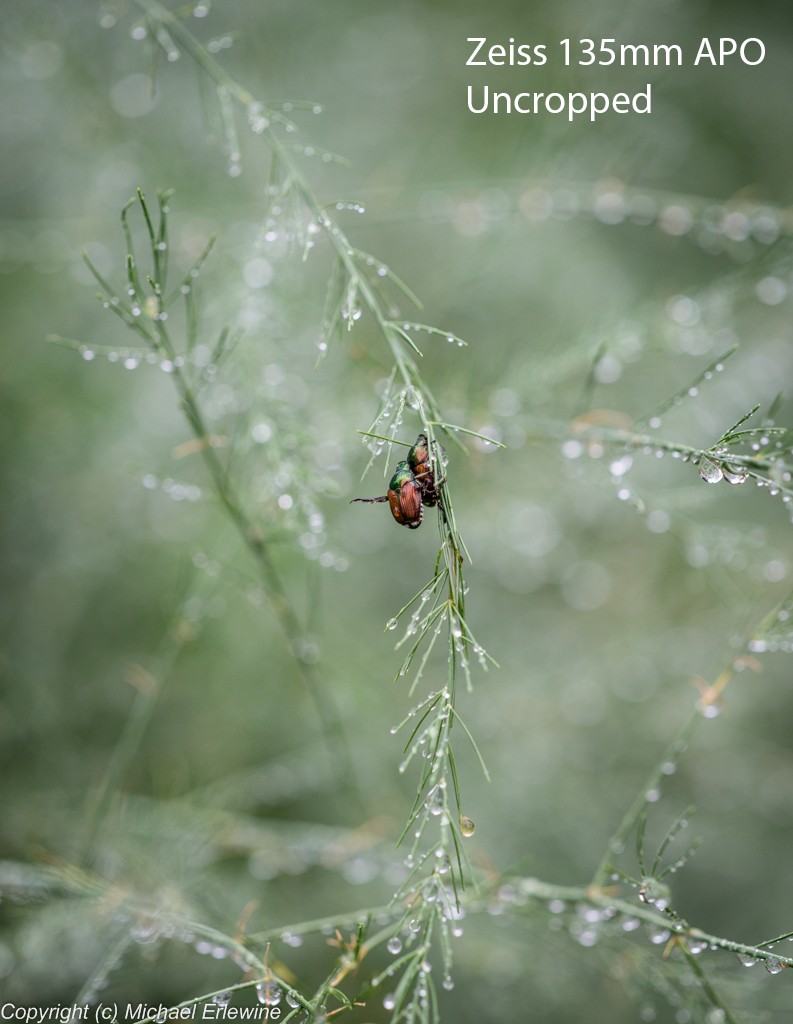 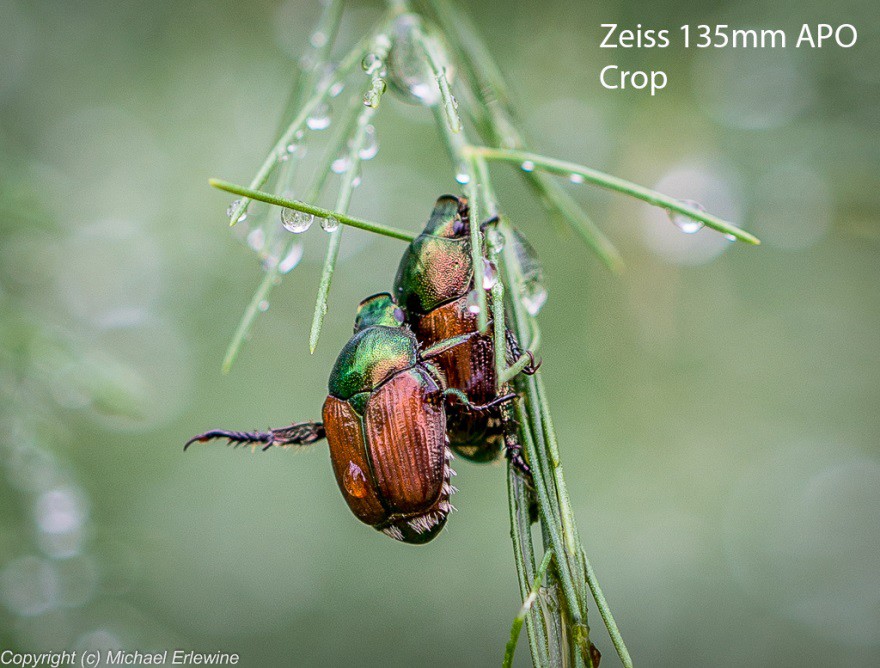 
I particularly liked the Voigtlander 125mm F/2.5 APO- Lanther and although I owned both the Zeiss 100mm and the 50mm Makro-Planar lenses, I tried to point out that they were sharp (perhaps too contrasty), but their lack of correction made me prefer not to use them. The 50mm Zeiss Makro-Planar for my work was the better of the two.

With the release of the new line of Zeiss lenses and the 135mm APO, things changed. I did not run out and buy one, but I was listening for the telltale hints from various reviewers that this new lens might be a different kind of Zeiss. I finally broke down and bought the 135mm Zeiss and was amazed at what a great lens it was. It blew all my best APO lenses right out of the water, although with some the difference was


close. With a lens like this, who needs most of the others, AND it was not even a macro lens!

I include a photo taken with the Zeiss 135mm APO lens (Nikon D800E), and a crop of some Japanese Beetles.

So I was ready for the 55mm Otus and knew just how to check it out. And sure enough, the 55mm is better than the 135mm (IMO) and as good as all the early reviews have pointed out, and for my work, better.

And this lens should be of special interest to close-up and macro focus stackers. My first tests, which will have to be repeated, show that a carefully done stacked photo (helicoid method) was outshone by a single photo taken at f/8 with the Otus. More startling, a photo taken at f/16 was amazingly sharp, almost as if the effects of diffraction don't appear as early on in highly-corrected lenses. I am sure they are there, but to the best of my eyesight I can't see them.

The Otus 55mm APO also takes reasonable extension without blinking. For me it works as a close- up lens, and perhaps as a macro as well.

It appears as if higher resolution cameras like 36 MP coupled with more highly-corrected lenses are a winning combination for photographers. I saw this in the Zeiss 135mm APO, but it seems further confirmed with the new Otus 55mm APO lens.

The single shots at f/8 (and even f/16) had everything sharper and with as great a depth of field as the carefully assembled stacked photos (using f/4). The only downside to the single-shot photo was the lack of good bokeh. Of course, bokeh was better in the f/4 stacked photo.

Up until now the stacked version of a photo (in my experience) was always sharper than the equivalent one-shot photo taken at a higher aperture setting, mostly due to diffraction. But it appears we are crossing some threshold here. I will have to let the techsperts check this out and explain it to me. Why are larger sensors and highly-corrected lenses less prone to diffraction. Diffraction is a law of nature, and we don't break nature's laws. So how does that work? What am I seeing here?

Perhaps they won't find the same result, but perhaps they will. Honestly, I might as well sell scores of my lenses and just keep these two and a buy few more that Zeiss will issue in the years to come. How about a macro lens Zeiss-Geist?

Included are some pretty rough shots taken with the Nikon D800E and the Zeiss Otus 55mm APO lens on a RRS tripod and the Swiss Arca Cube head. No attempt was made to "make pretty," but just to see how a stacked shot matched up to single shots at f/8 and f/16. Since, unfortunately perhaps, most of my work now appears on the web, I am wondering why the f/16 or f/8 single photos are not as good as the
stacked shot. I believe they are, which if this fact is borne out in time means this new lens really changes how I work. 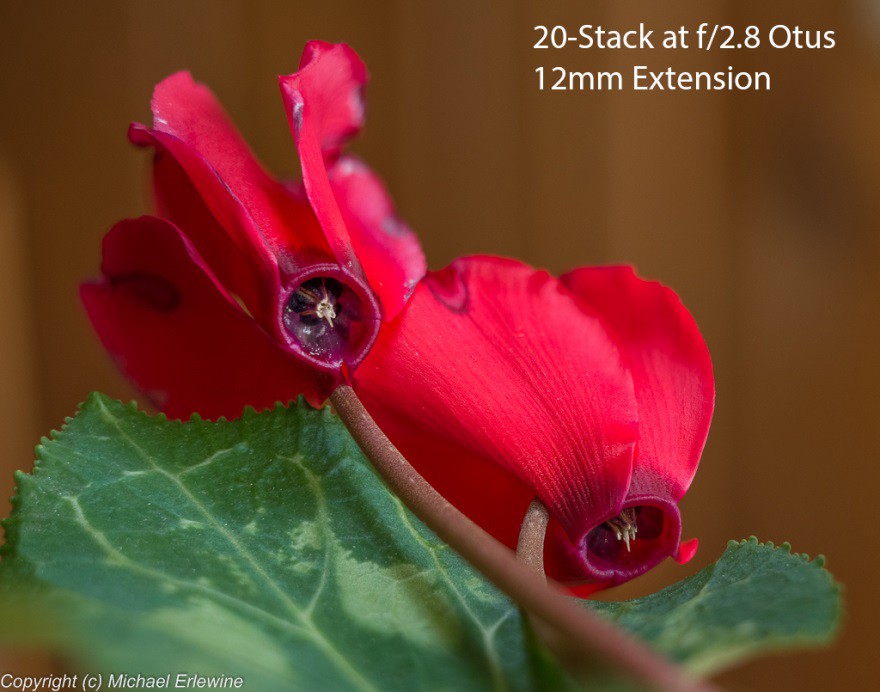 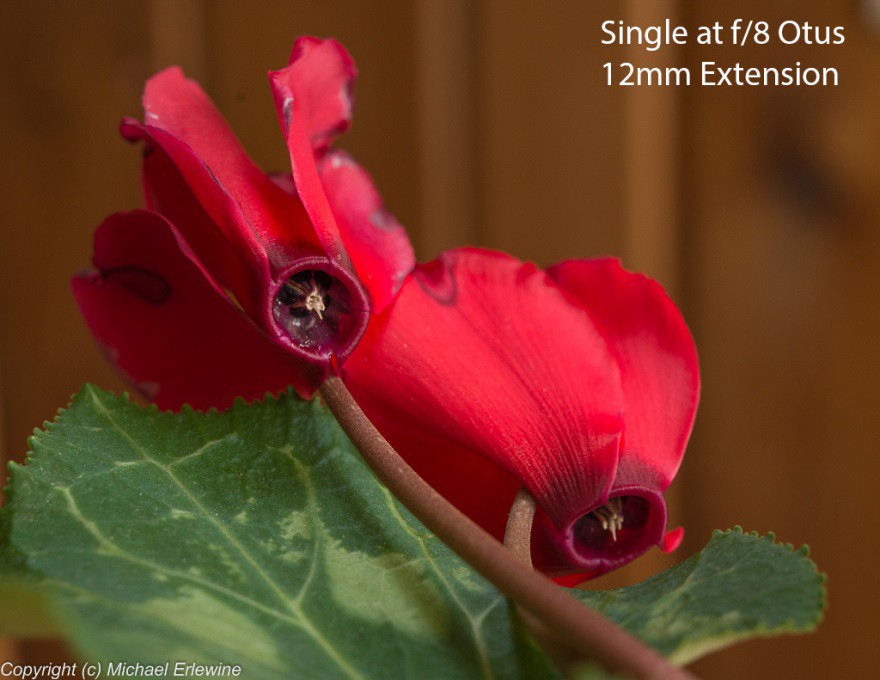 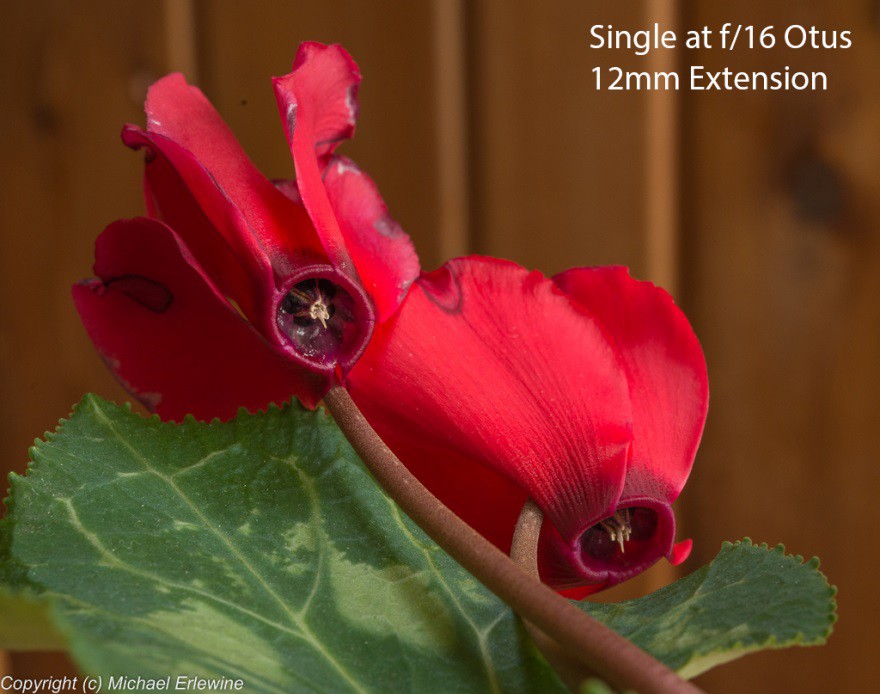