[Just my opinion, but a view of a home town from one who grew up there, not just as a city, but what is Ann Arbor all about?]

Most of us have a town where we came from. Ann Arbor Michigan is my home town; I grew up here. In the 1960s, Ann Arbor was very different from the overly-caffeinated and sophisticated city it is today. For one, it did not used to take me 20 minutes to drive across town, but that is beside the point. Back then, Ann Arbor appeared much less sure of herself (or was it just me growing up?). It seemed to be overly self-conscious and perhaps playing second fiddle (a weak sister) to other college towns like Cambridge, Madison, and Berkeley.

Ann Arbor had not yet found its place in mainstream America and what it lacked in bravado, it made up for in introspection and a quiet humility. What I did not fully grasp back then is that Ann Arbor is fecund, a fertile place, indeed a womb. It is pure feminine.

In the 1960’s, Ann Arbor’s innate receptivity and ‘femininity’ might well have been mistaken for passivity and naiveté, not that there was not some of that also present. Ann Arbor in the Sixties was not fully aware of itself, a city yet to awaken to its full mission, but busy nonetheless taking a direction that time would reveal as significant. And it took a while.

Most city names are feminine, but that is not what I mean by saying that Ann Arbor is “feminine.” There are two kinds of sculpture, one made by adding clay until we have a form, and the other by cutting away stone until we have a form. Ann Arbor is definitely of the second variety. It reveals rather than posits; it is passive rather than active, passive enough to give and actually allow birth.

At the time, growing up in Ann Arbor (and never really knowing any other city), I was only dimly aware that my home town was more ‘passive’, more giving (as in ‘giving way’), and generally just more receptive and understanding than many others. I might better say that I felt that other college towns (like Berkeley or Cambridge) were in some way more aggressive or just ‘on their game’. It was natural to assume that Ann Arbor was busy bringing up the rear. It is now obvious to me that it had not yet fully found itself.

Exactly when Ann Arbor did find itself (in the contemporary sense), I cannot say. I was too busy finding my own self and that happened in 1967. In 1980 I moved about 180 miles northwest to Big Rapids Michigan where I live to this day. As near as I can tell, Ann Arbor became an “adult” somewhere after I left town, perhaps I did too. Certainly,

Ann Arbor is confident and sure of itself today, and I am not just talking about students walking right in front of your car either. They always did that.

My best guess is that Ann Arbor became aware of its feminine qualities the same way I discovered my own gentler side, gradually, but certainly, by surrendering to surrender. In time, the passive qualities of the town have become a power, not a defect or liability. It is my opinion that this fertileness, this receptivity that Ann Arbor has in such high degree is very rare among cities. At least in this regard, to me Ann Arbor is very special indeed.

And I sometimes wonder just how many of us there are still out there, those who lived in Ann Arbor beyond our college years (not that I went to college), and were somehow unable to be all that we could be while living there, and yet blossomed almost as soon as we left the town. This has always puzzled me and perhaps every town is like that. ‘A prophet is never known in his own country’ kind of thing, but is immediately recognized from the outside. I don’t have enough data to even make a guess at this.

Or, is the deep receptiveness and anti-macho quality of Ann Arbor Michigan something that makes traditional superficial success more difficult-to-impossible to achieve in this town, yet at the same time builds strong habits for responding and accommodating life. This I wonder.

It is interesting that my first real business (incorporated) was formed in Ann Arbor, Matrix Software. I chose the word “Matrix,” not for its mathematical meaning, but because it meant “womb,” a place where something could be born. In lieu of my remarks here, I find this fact fascinating. An article written about my company for “Red Herring Magazine” pointed out that Matrix Software was the second oldest software company still on the Internet, second only to a little company called Microsoft.

Or, am I just a little crazy when it comes to the “meanings” in life. My point here is that Ann Arbor has always seemed for me to be a sacred womb from which good things come. Whether this just works for me I cannot say. I can only say it is true for me.

After all, how do towns come to be located where they are? Is it only because this road is connected to that road, is connected to another road? Or does the natural world have springs of spirit just as it has natural springs of pure water flowing? I like to believe in the later take on this, that land has indwelling spirits that also speak to us or for us, an oracle.

It is my belief that Ann Arbor is such an oracular place. At least in my life, it has functioned like an oracle, that rare vortex through which the universe has spoken directly to me, albeit not in words that I have always immediately understood. In essence, Ann Arbor has been a wishing well for all my hopes and dreams.

In ancient Greece they had oracular places, why not here in America? What great female spirit indwells in a city christened after two women named Ann and a stand of bur oak? The Anns’ arbor -- Ann Arbor. Tree Town.

“When you wish upon a star, Makes no difference who you are, Anything your heart desires,
Will come to you”

[Photo of Ann Arbor by Andrew Home, taken from Wikipedia.] 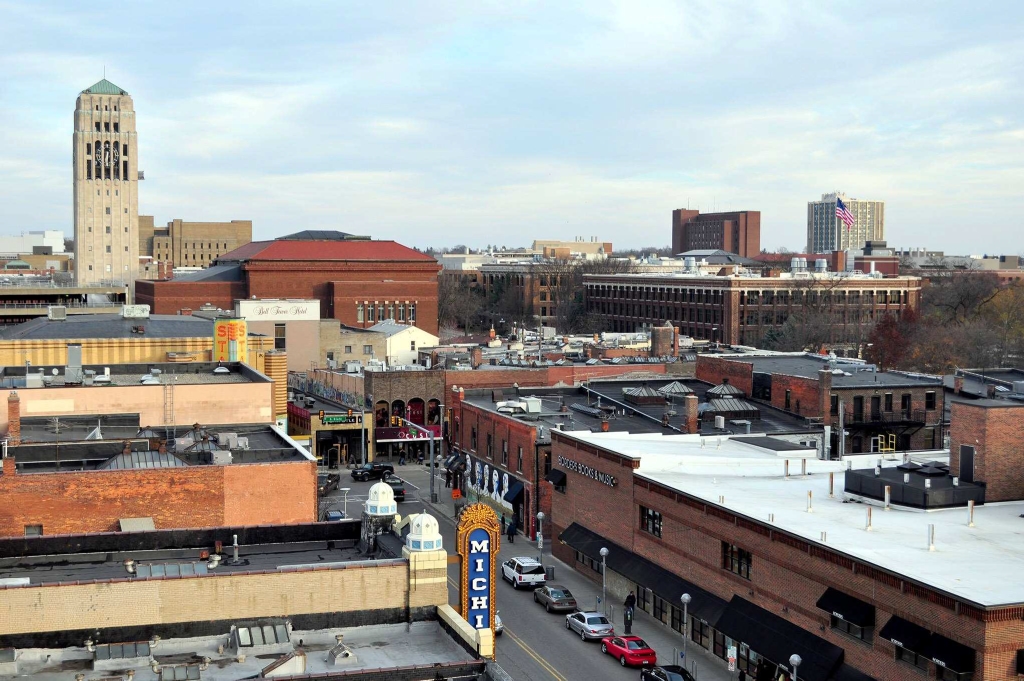