SNAKES ON A BUS

SNAKES ON A BUS

SNAKES ON A BUS
October 29, 2014
By Michael Erlewine (Michael@Erlewine.net)

I was raised in Ann Arbor Michigan and my being here unexpectedly now for some days finds me seeking out old haunts as one way to spend some time when I am not busy doing other things. One of them is the Alexander G. Ruthven Museums Building, which is part of the University of Michigan. I might as well tell some of that story, for those interested.

I can’t remember when I first went to the museum, but I was young, for sure. My interest in nature started when I was just a kid, perhaps about six-years old, and that building played a significant part in my life not only early-on, but it was even more important as I grew up. In fact it was in my late teens before the museum was not a primary focus for me, probably starting around the time that I discovered girls.

Walking yesterday (once again) through the four floors of exhibits, I was amazed at how little the museum had changed. At least three of the floors were almost exactly the same as when I was a kid. In fact, it was like they made a museum of the museum, perfectly preserving everything just as it was 60 years ago. This included the same dioramas with their faded poorly-stuffed animals and painted backgrounds. And there was the large fossil skeleton of an Allosaurus (shown here), a flesh-eating dinosaur, which as a smaller version of the later Tyrannosaurus Rex. As a kid, of course, standing in front of such a skeleton was amazing indeed. But there is more between that old museum and me.

There was a small zoo of Michigan animals located right behind the museum in a little round or octagon-shaped building. I would walk around the outside of that building admiring the live animals (bear, badger, raccoons, etc.) caged there. Over time I got to know the zoo keeper and before I knew it I was in that building and cleaning out the cages, helping to feed the critters, and happier than a pig in whatever. For a kid who loved nature, such an experience was like heaven.

As I grew up I became more and more of a naturalist, with large collections of all the nature-things, rocks, minerals, insects, dried plants, sea shells, and so on. And the live things were all over my house. I raised rabbits, skunks, squirrels, and so on. Over the years my focus gradually settled on herpetology and my special interests, the study of reptiles and amphibians, with amphibians beings my personal specialty, and among amphibians, it was salamanders that most captivated my interest. My house was filled with snakes, turtles, frogs, toads, and salamanders.

In my teenage years I became a voracious collector and gradually spent more and more time at the museum, not so much out in the exhibits, but back with the professors and grad students of herpetology. In fact I became such a known entity to them that they

made me a small office with a desk, etc. back in one of the ranges, where all the endless bottles of reptiles and amphibians were stored in pure alcohol. I guess I was a bit of a prodigy or something when it came to this study. I will mention here just two stories.

I spent one spring working with one of the grad students in the Edwin S. George Reserve out in Livingston County, not far from Ann Arbor. Together we picked six spring ponds, some of them quite large. We fenced off all of these six ponds with tiny screen fences, maybe 6-7 inches tall. We did this to stop the migrating salamanders trying to reach the ponds. Along the outside of the fences, we sunk #10 cans into the ground so that the salamanders would reach the fences, follow them, and then fall into the cans.
Then we would collect the salamanders, many hundreds of them, measure them, and release them inside the fence. We did this late night after night. It was cold, wet, time- consuming work.

Another project that I was co-author of was discovering a new way to gauge the age of salamanders. Previously to this work, salamanders were measured from stem to stern and then assigned an approximate age based on size. What I did was to stain the thin bones of the skull (the parasphenoid, for example), and then count the growth rings like we would count the rings on a tree. At least in temperate climates, this gave us an exact way of determining a salamander’s age. That is the kind of stuff I did.

I also spent one summer collecting for the University of Michigan, traveling through Texas with a wonderful entomologist named Ted Cohn, who was researching a carnivorous genus of katydids called Rhenia. I was collecting specimens of reptiles and amphibians for the university. I worked so hard on it that I had heat stroke at a place called the Enchanted Rocks, where I was chasing lizards around all day in the hot sun, and so on.

I hesitate to tell the story of my two-day bus trip from Dallas to Ann Arbor in which I carried a large satchel of live specimens under my bus seat, including dangerous copperheads and rattlesnakes that I had collected. I remember one gentleman sitting next to me on the bus who I was talking about snakes with, and he was telling me how he was not afraid of poisonous snakes. I finally pointed out to him that he was resting his one foot on my satchel, in which was a large rattlesnake, and other deadly snakes. He about jumped out of his skin, drew back his foot, and changed seat. So much for his bravery.

And rat that he was, he told the bus driver and before I knew it I was off the bus and standing by the side of the road, satchel in hand, discussing this with the driver while people peered and gawked from the bus. After a long time, because I was so young (probably 16 years old), they let me back on the bus after making sure my snakes were securely locked up.

My mother was a saint to let me keep all of those critters, including the many snakes, some of which would escape around our house, and which she was terrified of. There are other stories that I will leave out for now about escaped snakes in the house.

Anyway, you get the idea. I was deep into being a naturalist, and for me it was no idle pastime. So, walking through the university museums building yesterday was like going back in time for me. And the fact that the exhibits had never really changed put me in a bit of spell, all by itself.

So, here I am, still in Ann Arbor working through some business and wandering in my past.

[iPhone snapshot of the Allosaurus in the Museums Building, taken yesterday.] 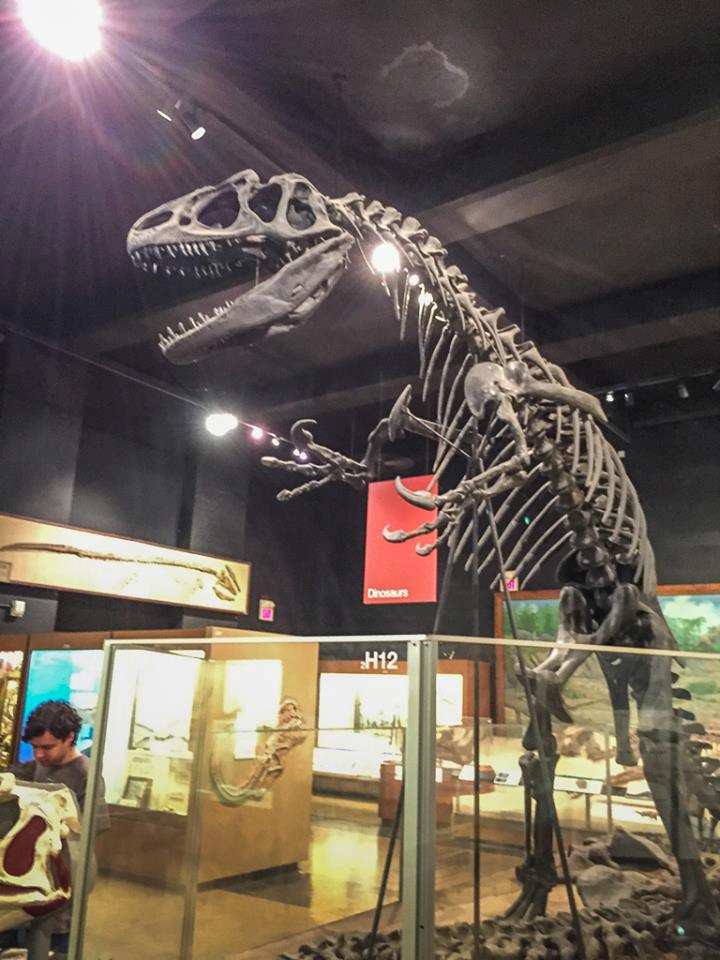