I want to tell you a little something about a good friend of mine. To look at him, you might see just a little black dog. If you did, you would be far away from the truth, for this dog has probably seen more of the world than most of us reading this now. He has traveled the length and breadth of the country. He has hitchhiked, walked, hiked, driven in cars, and hopped freight trains going who-knows-where. He has busked cities from the east to the west coast and played music at coffee shops, bars, colleges, and (of course) most often just out on the street.

His full name is Molotov, which should tell you something right off, but most of us just call him Molly. He was born the smallest of a litter of half-breed pups, I believe in Ann Arbor, Michigan. His mother was killed by a passing car when he was still too young to even walk, leaving him helpless. My daughter May, who was brought up raising baby animals and returning them to the wild, took compassion on these tiny puppies, and she knew just what to do. Molly and siblings were raised in the bottom of an old sleeping bag, hand fed, hand pooped, and carefully kept alive. And to this day, Molly loves to get inside and under anything soft and warm, the original ‘underdog’. If there is a blanket or coat laying around with a tail sticking out from under it, that probably is Molly. How I came to have Molly is a short story in itself.

Today my daughter May is a professional singer/songwriter, known all over the Midwest, heard on the radio, appearing at concerts, festivals, etc., but back then she was just a struggling musician out on the road. Her hair was usually in dreadlocks and it could be pink, blue, or both. She had all kinds of rings, chains, and what-not hanging on her person and about the only gift she might cherish would be a really cool Swiss army knife. And we did not see as much of her as we would have liked.

May was on the road all the time, traveling from city to city, busking for money, and playing anywhere people gathered and would listen. As an old hippie myself, I took this in stride, but Margaret and I worried about her just about all the time. Her protector was Molotov, who was always by her side, and she even trained him to bark fiercely to ward off whatever. And, although not a big dog, he can sound just like a big, nasty dog, one that you would not want to tangle with.

And as mentioned, Molly and May did everything together, hitchhiking from town to town, hopping freight trains, camping out, sleeping wherever they could, and eating whatever was around. This went on for some years. We saw them both a few times a year, if we were lucky. They would roll into our home, usually with a bunch of friends, all dressed down and punked

out, and funky as could be. They would stay for a few days, and then just take off for somewhere else. To them, we must have appeared to be the great ‘washed’.

When May’s music began to be noticed, things changed. For one she and Molly were around more. She often lived out back of our house in a tiny cottage, either by herself or with a boyfriend. They did all kinds of things, like make stringed puppets, puppet theaters, build small livable-sized tree houses, and all kinds of stuff like that. We just watched and took it all in, happy to have our daughter around us. And then people began to REALLY love her music.

As a professional music critic (founded: All-Music Guide allmusic.com) and publisher of many music books, I did not know at first what to think of my own daughter playing music. Of course, I loved it. I was her dad! But I soon also knew that her great songwriting abilities had nothing to do with my being her father. She was just a natural, just that good. Who would have thought?

Around the same time, May began to be gone on gigs more and more of the time, and it became increasingly difficult for her to take Molotov with her, especially in winter because there were no dogs allowed in most places she was now playing. She was no longer busking on the streets where dogs can be tolerated. So, Molly stayed home with us more and more of the time. This was not a problem, because if there is one thing I like, it is dogs, and soon Molly and I became closer and closer friends. May really loved Molly, but she also could see that I did too, and it made it easier for her to leave him with us much of the time. And Molly and I just hung out a lot.

Molly would spend most of his time in my office sleeping on the couch there (the only couch in the house he was allowed on), and when I took a nap, Molly was right there crawling under the blanket with me, pushing me to one side. You remember that he loves to be under cloth of any kind. And so it began, a real friendship.

And some years ago Molly officially became my dog when I downloaded some legal adoption papers from the Internet, filled them out, and had May sign them. I even checked the box that said he was part Native American, which added some clout to his pedigree. We all liked that. And sign them she did. After that, Molly did not travel any more.

Many years have passed and Molly, like myself, is getting older. You would never know it because he is as bright and sharp as ever, but he does have a distinguished white muzzle these days, like many of us do.

I have to tell you that Molly is all about food. He really does live to eat or at least he looks forward to his meals even more than I do. Years ago I discovered how to tell a puppy from an adult dog. You hold a treat up between the dog and yourself and then move the treat sideways to the right or left. If the dog continues to look at you, it is still a puppy, but if it follows the food, it is officially now a dog. And Molly will eat anything, any old grape that has fallen, and once in a while even a piece of lettuce. That is how much he appreciates food.

I tend to get up very early in the morning, often around 3 AM. When I come downstairs to my office, there is Molly curled up on the office couch, but he does not acknowledge my arrival. No way. He seldom looks up when I come in. Why? Because he wants everyone to know that he is definitely sleeping now. There he is curled up, head tucked out of sight, and there are no friendly “Good Mornings!” or wagging of tails.

However, around 7 AM, he is up, standing at my feet, wagging his tail, and just as bright and happy as he can be. This is not so much a hello as his message to me that it is time to feed him. He happily escorts me to the kitchen, leaping and prancing the whole way. His meals mean a lot to him.

Recently our other dog, Kota, who was quite old (and much bigger), passed on, leaving the whole house now to Molly. Previously Kota insisted on being the Alpha dog, often preventing the much smaller Molly from gaining access to things like… the water dish, for example, or just the freedom to roam around. Both dogs were male and un-neutered, so this was just the pecking order. These days Molly has found all kinds of new places to hang out aside from my office, although the office is his main ‘den’ for sure. An easy way to find him is to look for even the least patch of sunlight that enters the house. There is where you will find Molly, for he is a sun dog, for sure.

Aside from food, the other thing Molly really loves is walking in the meadows and woods with or without us. He can suddenly take off and disappear on a walk, just when we are distracted for even a moment. He just loves to imagine that something is up and needs his attention, the tiniest movement or sound. He will take any excuse to dash into the underbrush and be gone for way longer than we want him to. But sooner or later, at least up to now, he appears, often way behind us on the trail, but running as fast as he can to catch up.

Anyway, thanks for listening. I have to go, because Molly wants his breakfast! 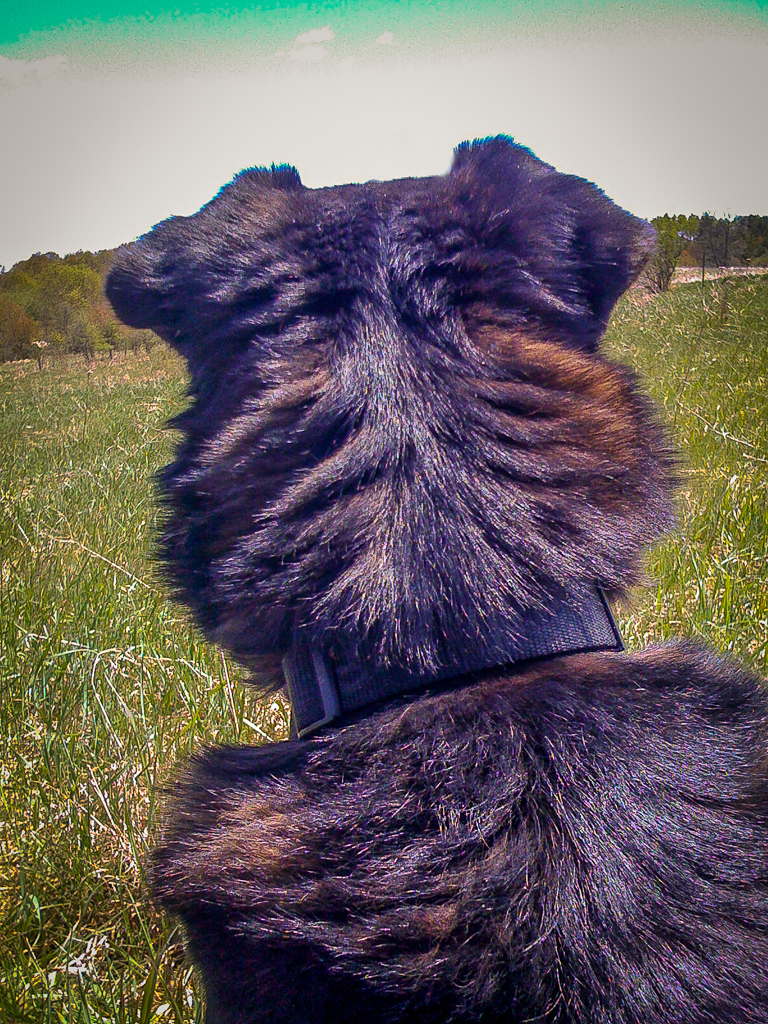